There are many ways to approach the domain of interfaith learning and understanding. One of my favorites is through the lens of individuals. When I founded the Elijah Interfaith Institute a quarter of century ago, it was in response to the question: Where can I learn about the lives of Christian saints, in Jerusalem? The answer was: nowhere, which led to the creation of a learning space, where one could.

I have studied, and taught saints. In one project, I convened scholars to consider who might be inspiring individuals across religions, a project we framed in terms of a novel, or revived category: Religious Genius. I have devoted book-length studies to religious figures, beginning with the rabbinic (anti) hero, Elisha Ben Abuya and later in a volume devoted to Martin Luther and how he can serve as a model for what goes wrong in relations between religions.

So, it makes sense that when I sought to convene scholars and leaders of all major faiths in order to honor my friend Rabbi David Rosen in honor of his 70th birthday I would turn to yet another dimension of religion made personal, this time in the field of interfaith relations. Thus was conceived Interrelgious Heroes: Role Models and Spiritual Exemplars for Interfaith Practice.

This is a work I take particular joy in, inasmuch as it is not only a study of a figure. It is, in fact, a history and an overview of the entire interfaith movement. It is thus one valuable entry point into interfaith studies, seen through the lens of the great men and women who shaped the movement. Whether for purposes of individual learning or for purposes of classroom study, this collection of short essays functions as an introduction to interfaith. 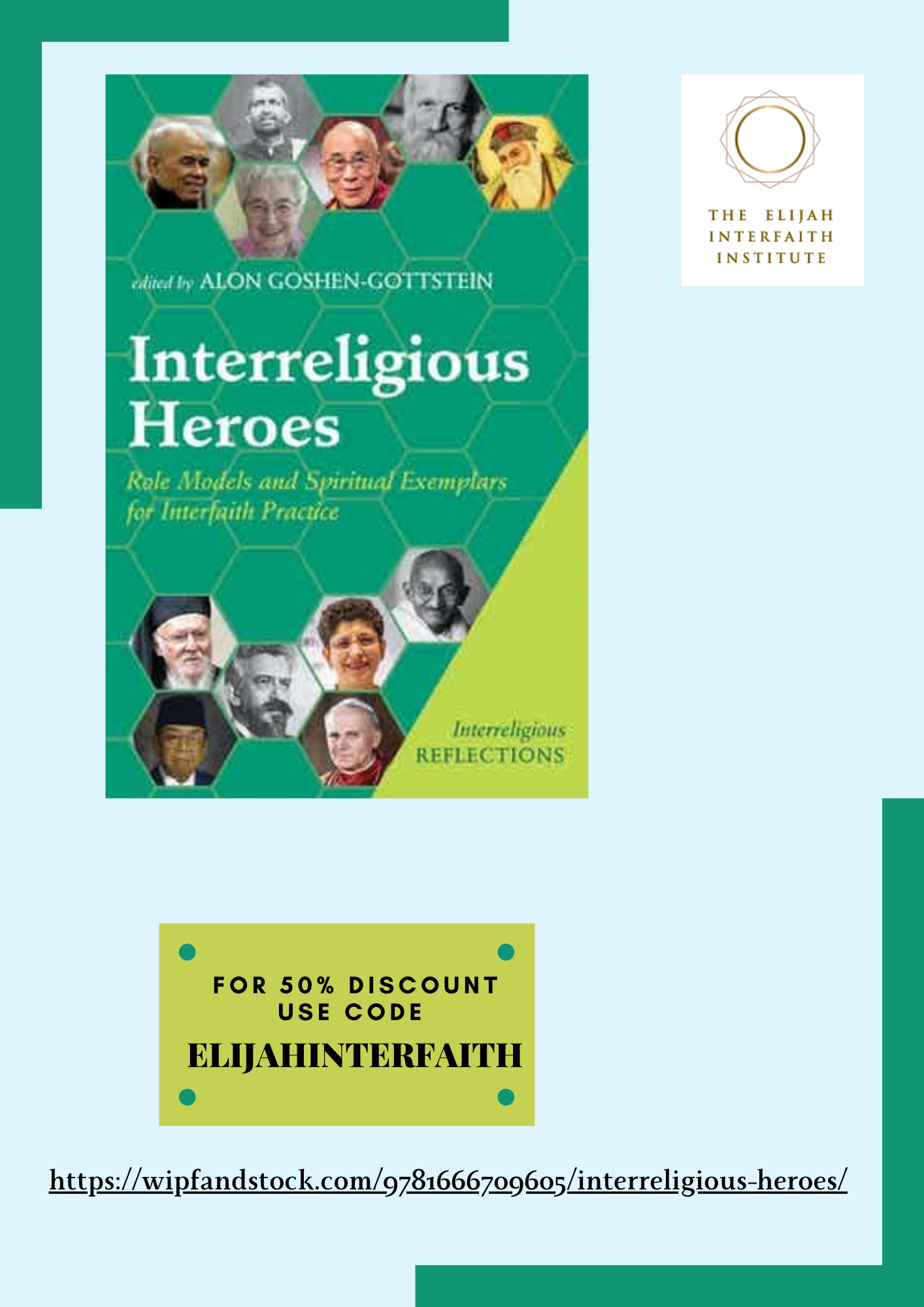 40 noted religious leaders and scholars responded positively to my invitation to contribute. This is what they were asked, and I quote from the letter of invitation:

“The choice of topic stems from the recognition that all those who are working in the field have been and are inspired by figures who preceded them and who serve as inspirations and role models. What we would like is to learn:

The writing should be personal, but grounded in the objective reference to the figure.”

The request was for contributors to contribute towards the construction of a gallery of figures whose primary characteristic is inspiration and impact on the authors. As a consequence, many of the authors wrote about “my interfaith hero”. Many of the authors spoke of individuals they knew and who had direct influence upon them. As the group of authors are activists and leaders engaged in interfaith, this would naturally yield a significant picture of interfaith actors going back one generation and more.

It was quite interesting to note the breakdown of interfaith heroes. Church hierarchs tended to write about other hierarchs; children wrote of their parents; women tended to write of other women. Most heroes were chosen from one’s own religion, a fact easily explained in view of the premium placed upon inspiration. There are, as this volume indicates, some notable exceptions. Some individuals found their inspiration in figures of other religions. Significantly, the figures profiled in other religions are inadvertently teachers and scholars, rather than religious leaders in any organizational sense. Scholars provide a neutral bridge, that allows inspiration to be shared beyond one’s own religion.

In an attempt to tease out the various possible dimensions of interreligious heroism, I broke down the presentations into smaller groups, each of which has its own particularity. Let me dwell briefly on each of these groups.

The first group titled “Spiritual Inspiration and Precedent” features figures of old, great teachers and models that continue to inspire and impact the lives of believers today. The volume opens with a juxtaposition of Saint Francis and Pope Francis, suggesting the historical span of the book and the basic dynamics of how interreligious heroes can inspire others, generating in turn other heroes. Several other figures of old taken from the context of the spiritual life of India are then featured. The ability to draw on classical precedent is a potential that all religions have, and is especially relevant as believers seek precedents and examples for their present day engagement across religions.

The next batch of essays are grouped under the title “Academic and Philosophical Foundations”. These too engage foundations and precedents. However, the figures discussed are not great spiritual exemplars but rather scholars and thinkers who contributed to the formation of the present-day interreligious environment. These figures lay the groundwork, philosophically or historically, allowing us to take for granted much of what we do take for granted today. They are some of the founding fathers, so to speak, of the engagement and interaction across religions that is characteristic of the interfaith movement.

A special group of essays is titled “Transforming the Catholic Church”. Cardinals and Bishops make up twenty percent of the contributors to the present essay. Most of these are Catholic, and of these, the great majority refers to processes within the Catholic Church and the exemplars for engagement across religions that it has produced. Grouping these contributions together is not only a function of the composition of authors for the present volume. The Catholic Church is the group responsible for the single greatest transformation in teachings in relation to other religions that humanity has ever seen. The momentous processes relating to the promulgation of Nostra Aetate and its various later expressions - pedagogic, institutional and personal - occupy a place of honor in the gallery of figures represented in this book.

Advancing interfaith relations involves understanding the other. But it also involves a reexamination of one’s own view of other religions. This is one of the great hallmarks of Nostra Aetate and is a precondition for making meaningful advances in interfaith relations, regardless of how one conceives of their purpose. The next group of essays is accordingly devoted to individuals who have rethought the theoretical foundations of their religion’s views of other religions. It is therefore called “Revisiting Theological Foundations”.

One group of heroes is characterized by its specific spiritual interests. Under the rubric “The Spiritual Quest” are listed individuals for whom interfaith engagement has served, above all, a spiritual purpose and formed part of their own personal spiritual quest. The examples of deepening of the spiritual life by engaging other religions then provide paths and precedents for others, and in particular for schools and disciples associated with these figures.

A complementary purpose for engaging across religions is described as “Increasing Understanding”. This cluster of essays focuses on individuals who have made a contribution to and whose efforts were geared towards increasing understanding across religions. It may be that increasing understanding is not a goal in and of itself. This goal may be construed as subservient to some of the other purposes and goals, reflected in the sub-groupings of this project. Nevertheless, enhancing understanding is a distinct approach and purpose of interfaith engagement. It involves religious leaders, but in particular scholars who have been devoted to the history of particular relationships, as well as theologians in quest of a better understanding of their religion and that of the other.

Perhaps the most common cause for present-day interreligious engagement is not so much the view of the other but the ways in which engaging the other serves the needs of society. The most frequent needs in today’s interfaith scene are advancing peace or taking care of what Pope Francis refers to as our “common home”. It is therefore no surprise that the most populated sub-group in the present volume is the one that describes individuals whose efforts can be described as “Engaged and peace Activism”. Within this group peace is perhaps the most important and common concern, often serving as the primary motivator for interfaith relations on the ground.

Considering the collection as a whole, it offers validation on many levels. It validates the approach to interfaith studies through the lens of heroes. It also validates distinct approaches to interfaith as serving their respective purposes. And finally, it validates the key intuition, and that is that one can be inspired by the interfaith work of individuals from other traditions, as they give expression to novel ways of practicing interfaith relations, ways that speak not only to them or to their communities, but to all those who seek to deepen interfaith experience and understanding.

Interreligious Heroes is available from Wipf and Stock with a 50% reduction, when ordering directly from the publisher.Use coupon code ELIJAHINTERFAITH

Of all 12 of Rose Castle Foundation’s ‘Habits of a Reconciler’, one which resonates particularly...

What my grandparents taught me about hospitality

This week I attended the funeral of my grandparents, who both passed away in February having caught...

A group of seven emerging leaders working to promote peace and reconciliation in the UK, Europe,...